skip to main | skip to sidebar

How to make your own POE injector:

Why I posted this blog on an insignificant device like POE Injector:

Coming from an R&D background, I know the value of good tools and peripherals and I don't mind spending my hard earned dollars on them. But I hate to waste money when the cost of a device can not be justified. The same is true for POE switches. It is shocking to see that cost of a POE switch is approximately 4 to 5 times higher than normal Ethernet switch. And with umpteen numbers of POE devices coming in the market everyday, these vendors are minting money because an average Joe doesn't know what he is paying for.
If that was not enough, a few companies came up with the concept of POE injector. Well, if you have this device then you can use normal switch and feed power to your POE device using this POE injector. Again, if you see the cost, you will be spending somewhere $35-$40 per POE device.

I decided to do some research on the subject and the result was mind boggling. I tested my findings on an actual POE camera and eureka!!! it worked. So this will be saving me at least $10000 per year by not buying POE switches. Well, yet again it is proven that we Kiwis have DIY in our DNA.

Anyway, let us come to the main topic of how to make your own POE injector. Now onwards, I will not be gossiping like above and promise you to be as to the point as possible. So, let us begin!!!

Now, out of the total 4 pairs, 2 pairs are used for data transmission and two pairs remain unused. In 568A, pin nos. 4,5,7 and 8 are unused. Commercially available POE injectors make use of these unused pairs. Believe me, there is no electronics involved.
So, while crimping your RJ45 connector, leave 7 and 8 out of the connector and crimp the remaining 3 pairs. You can choose to use 4 and 5 as well but practically I have found that crimping becomes easier if you drop out the last pair. Also, if your device takes more power and cable runs longer distance, you may decide not to crimp 45, 7 and 8 and use one pair as positive and the other pair as negative.

2) Do not reach a conclusion unless you have tried it:
So now, we decided to try it. We made a patch cable where we did not crimp 7 and 8 pins and connected these two wires to a DC plug as required by our camera. It looked like below: 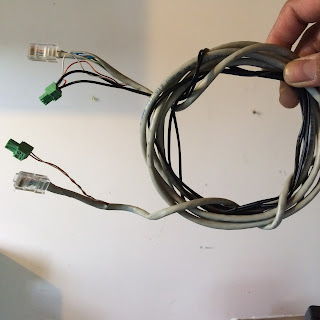 Then, we connected a normal Ethernet Switch with our IP camera giving power on extra brown and white/brown wires. 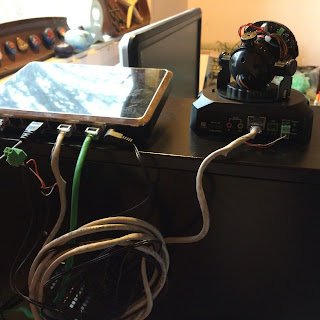 And then we configured our IP camera with these connections and you can see below the camera output on the screen. 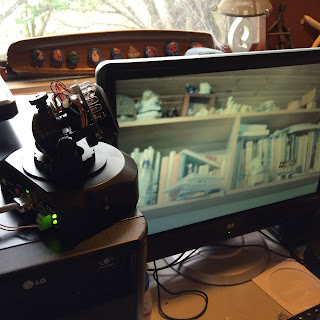 2) But what if the POE device doesn't have a power input:
Well, you are stuck if this is the case because then you will have to use POE switch because unlike POE injectors, POE switch uses data signals to give power to the POE devices. Data signal is modulated over power by the POE switch and it is demodulated at the POE device's end. So, if two cameras have exactly similar specs and have the same cost, but one has separate power input and the other doesn't, then the camera with the power input will cost you less because in that case you will save money by not using the POE switch.
You may watch the video below if you prefer watching over reading...


Finally, do not forget to thank me if you really save a few dollars as a result of my post.

Also, Do you want to learn how to crimp an RJ45 Connector? Watch the video below:

Posted by salsym at 4:22 AM No comments:

Electronic Security and Point of Sale solutions on Facebook

Promote Your Page Too